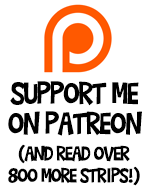 As you may or may not know, Kickstarter is open to Canada September 9. Jon Esparza and I have an idea for one we’ve been working on for some time. The idea is simple: we each pick five strips of ours we want to turn into cartoons, and then produce five small animations based off of our comics. Right now we’re seeing if people are interested. Letting us know is simple: favourite or retweet our tweets on the subject at our Twitter handles @picpak and @JonsCrazyTweets, send an e-mail, tell us on Facebook, or reply to this post. Got suggestions for which comics you’d like to see animated? Be sure to let us know by using the previously mentioned methods.

Showing interest is one thing, but interest doesn’t help fuel our dreams. So that’s why we want to know: Would you support a Kickstarter to create animations based on our comics? If so, please vote in the poll below. Thank you!

EDIT: The poll has been closed. We’re going through with this either way. Thanks for voting!